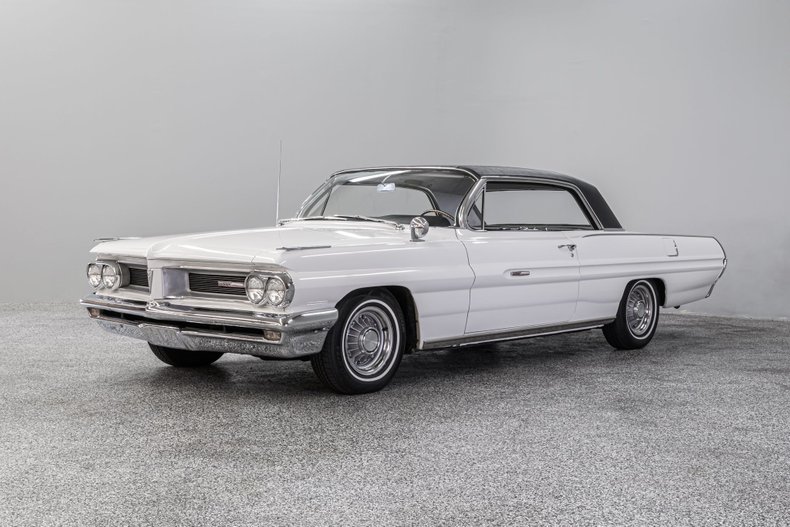 The Pontiac Grand Prix was introduced in 1962. It was essentially a top-of-the-line Catalina coupe (wheelbase 3” shorter than the Bonneville) fitted with modest chrome trim and a sporty interior. The performance-minded John DeLorean contributed to the development of both the Grand Prix and the GTO. This partially restored (2009) Gran Prix is a perfect example of his 'full-sized GTO'. The current owner believes that the mileage shown (51,607) is actual (with service receipts). The exterior was professionally re-sprayed in the original Cameo Ivory (code C) and the vinyl top (which appears to be the original) is in outstanding condition. Chrome is minimal, but the factory 8-lug Kelsey-Hayes aluminum wheels are a perfect accent to the beautiful lines of this coupe. The partially restored black vinyl interior is in very good condition. Seats were reupholstered and other features include a padded instrument panel, deluxe steering wheel and courtesy lights. There is a full console with floor mounted shifter and factory tachometer - everything in virtually original condition. The 'Trophy' 389ci engine, a motor that was developed by Pontiac in the mid/late '50s, powers our Gran Prix. It incorporated proven concepts engineered by the Cadillac motor division. This engine produces 303bhp with 4-barrel carburation and dual exhausts. Bulletproof Pontiac 'Trophy' motors were later produced in high-performance versions up to 455ci that powered the GTO and the Tran AM. Our owner states that this 389 has never been rebuilt and it still sounds like a Swiss watch. It is backed by the 3-speed Roto-Hydra-Matic transmission and factory differential. This Gran Prix is equipped with a factory AM radio, power steering and 4-wheel 'Wonder Touch' power drum brakes. There are few of these Pontiacs around, and even fewer as original as this one. Our '62 Gran Prix is very special and belongs in your 'Poncho' garage. ALL VEHICLES SOLD “AS IS”.