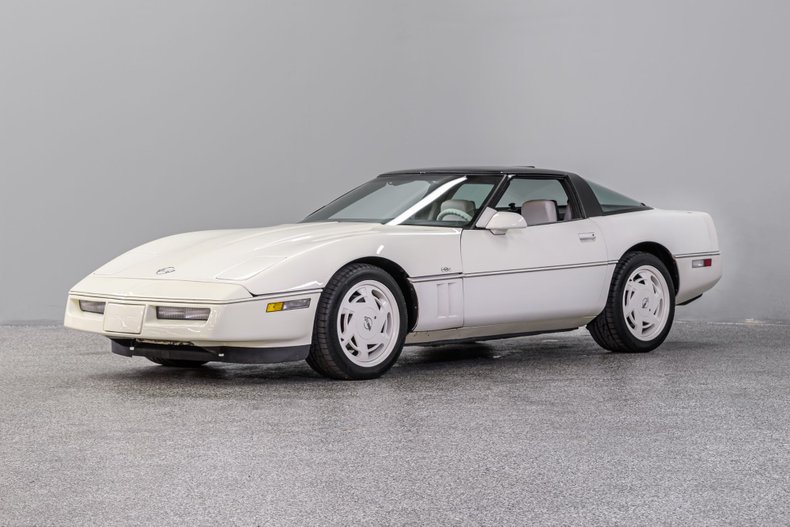 The C4 Corvette, released in 1984, was an innovation. It represented a clean break from the previous generation Corvette with a completely new chassis and modern, sleeker styling. The 1988 35th Anniversary Edition was finished in a white theme to honor the 1953 Corvette. The Corvette featured a Bright White exterior that was offset by a tinted acrylic roof panel. The car's accents were also finished in Bright White and commemorative badges were added to the body sides. Our restored (2017) 1988 Corvette 35th Anniversary Edition coupe exemplifies this model. We have receipts of the process. Of the 2,050 Anniversary Editions produced, this was #103. The Bright White exterior was carefully refinished and the 'smoked glass' roof panel has been well cared for with only a few minor imperfections. On the inside, the Anniversary Corvette received dual power 6-way Sport Seats upholstered in white leather, white console/door trim and a white leather wheel. The Sport Seats in this car have been completely refurbished including the automated aspects. Comfort features include automatic climate control, power locks, power tinted windows, tilt wheel, cruise and an aftermarket JVC AM/FM/CD stereo system. The C4 is powered by an L-98/350ci motor that is said to have not required a rebuild. With aluminum heads and Tuned-Port Fuel Injection, it produces 240bhp and 345 lb/ft torque. The L-98 is backed by GM's 4-speed 700R4 Turbo Hydra-Matic gearbox. It is equipped with power steering and 4-wheel ABS power disc brakes w/12” rotors. Handling of the C4 was enhanced by a totally new factory independent suspension package. The front suspension saw the earlier C3 coil springs replaced by a transverse fiberglass monoshock spring that is similar to the rear suspension design. Anniversary Edition 17” painted alloy wheels mount Sumitomo Performance radials. This is a very nice 1988 35th Anniversary Edition Corvette. ALL VEHICLES SOLD “AS IS”.