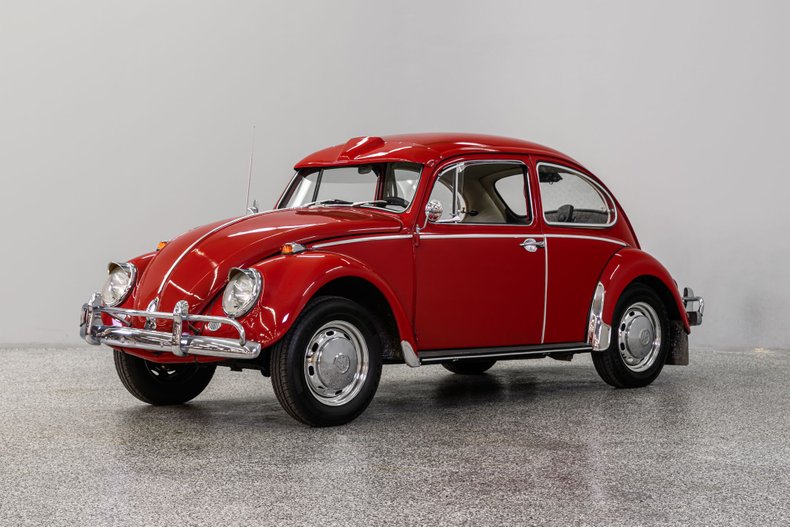 The Volkswagen Beetle was one of the best selling cars of all time. This fully restored (2018) '66 Volkswagen is a beautiful example of a Beetle. Odometer mileage shown, just over 82,400, is said to be actual. The body was professionally refinished in original Rudy Red and many distinctive accents have been added. There is a full windshield shade and an abundance of chrome pieces including door handles, eyelids, bumper/fender guards and rear grill trim. The running boards are solid and 15” Federal Super Steel radials are mounted on chromed VW wheels with dog-dish caps. The interior has been restored back-to-original in black vinyl and the dash is classic Volkswagen except for an aftermarket AM/FM/cassette stereo. It is equipped with a heater/defroster, front seat belts and a wiper-delay feature. There are no power windows, power seats, power locks or air conditioning. However the rear windows do have the pop-out option so this Bug is very cool - just roll down the windows and have some fun. The Beetle is powered by a 1300cc flat-four that is said to have not required a rebuild. It is housed in a nicely detailed engine compartment and mated to 4-speed manual transaxle that shifts smoothly. Four-wheel drum brakes provide stopping power and all electrics have been upgraded to 12 volts. Look at the photos. This is a professionally restored Beetle that someone is going to have a lot of fun with it. Drive it or show it – an outstanding classic Volkswagen Beetle. ALL VEHICLES SOLD “AS IS”.