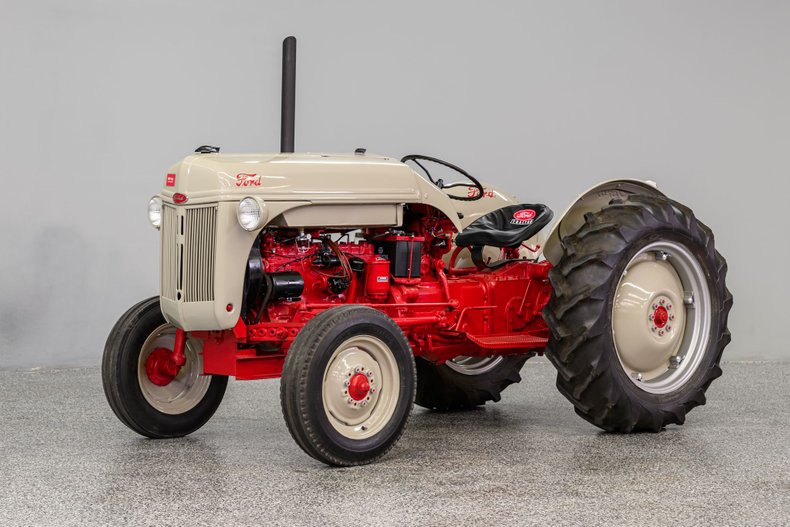 Ford built the 8N series tractor from 1947 through 1952. It was a workhorse and became the top-selling individual tractor of all time in North America. The 8N had upgrades from the earlier 2N model including an available 4-speed manual transmission and a 3-point hitch that was equipped with an new upgrade called 'Position Control' that allowed the user to set and keep the height of an implement. It was also the first Ford tractor with the classic 'Red Belly' paint scheme. This fully restored 1951 Ford 8N (showing 7.9 hrs.) has been in a local collection for years. The standard powerplant for the 8N model was a 120ci 4-cylinder flathead with an output of 27hp. This tractor is equipped with the Funk 6-Cylinder Conversion Package. In 1948, the Glover Equipment Company started converting Ford N-Series tractors to use Ford's 95 horsepower industrial 6-cylinder flathead engine. Glover teamed up with the Funk Aircraft Company and began manufacturing and selling the Funk conversion kits for N-Series tractors. Most of the Funk conversion kits were sold and installed at the dealer. It is estimated that only about 5,000 8N tractors were fitted with this Funk conversion. Backed by the constant-mesh helical gear 4-speed, the Ford-Funk tractor was a more versatile machine. The hydraulics system of the 8N is also powerful and reliable. It consists of a piston pump driven directly by the PTO shaft and a self-contained hydraulic unit with ram cylinder and control linkage. Our restored Ford 8N tractor is ready for your next parade/show, or it will go to work for you. ALL VEHICLES SOLD “AS IS”.