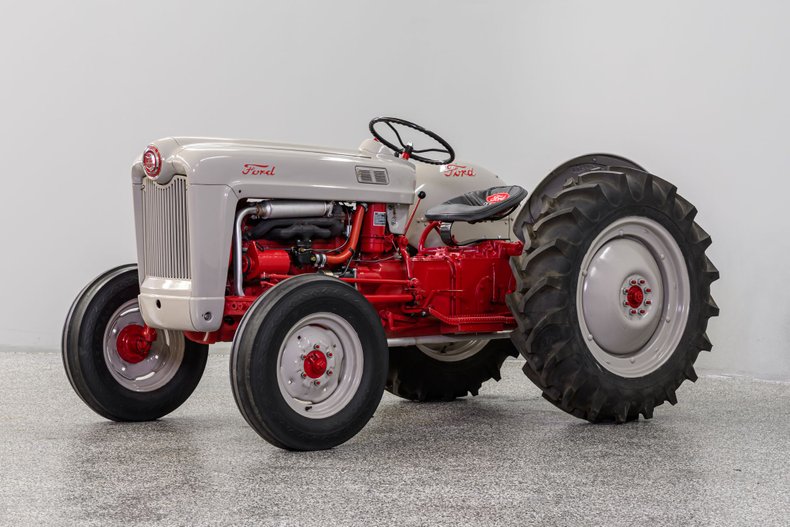 The Ford NNA tractor was introduced by Ford as an entirely new model in 1953 and dubbed the 'Golden Jubilee' - Ford's 50th Anniversary. It was designed as a replacement for the Ford N-Series tractors. The NAA designation was reference to the first three digits of the serial number used with this tractor. It is slightly larger than its predecessors - four inches longer, four inches higher and 100 pounds heavier at 2,840 pounds. The NNA featured streamlined styling, 50th-year Golden Jubilee badging (popular with collectors today), a new engine and new hydraulics. Our 1953 Ford NNA has been fully restored and part the Dennis Carpenter collection for many years. Under the NAA's new hood is a 'Red Tiger' 134-cu.in. overhead-valve, gasoline inline four-cylinder engine outputting 32 hp. A four-speed transmission was standard on the NAA. (There was also a Sherman overdrive unit that was installed on some NNAs tractors, but it is not on this tractor.) The NAA's new 'Solid System' live hydraulics relied on an engine-driven hydraulic pump rather than the PTO-driven pump that was standard issue on the earlier 8N tractor. This versatile system allowed the hydraulics to be operated without the PTO being engaged. The 1953 NNA was also the first tractor that Ford built after a court battle with Harry Ferguson in 1952 that resulted in the 'Ford-Ferguson 3-Point Hitch System'. Our 'Golden Jubilee' Ford tractor is a timepiece that is ready for a new home - is your barn ready? ALL VEHICLES SOLD “AS IS”.