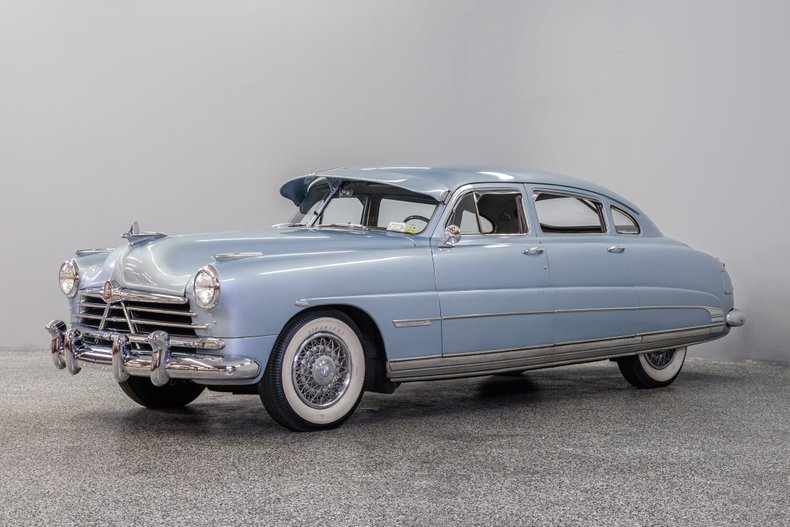 The Hudson Commodore was produced from 1941 through 1952 and was Hudson's most luxurious model. Post war production of the second generation Commodore began in August 1945 and was based on earlier pre-war models. In 1948, Hudson introduced the third generation of the Commodore. This new model featured a sleek new body silhouette and was better equipped than most of their competitors with features like front/rear armrests, dual wipers, sealed beam headlights, deep pile carpeting and foam rubber seat cushioning. This solid 1950 Hudson Commodore sedan received a partial exterior restoration in 2016. It is a virtually complete Commodore – the hard to find pieces are all there. A single-stage enamel respray of Bali Blue (believed to be the original color) is accented by a generous allotment of chrome, rear fender skirts and steel rims with full factory wire-wheel covers that mount Firestone wide-white bias tires. The interior needs restoration. Broadcloth seats are worn and everything needs a little detailing. However the classic '50s dashboard, with its full compliment of gauges, is still as stately as it was in 1950 – and as we said before, this car is virtually complete. This Commodore is powered by Hudson's 202ci flathead six-cylinder motor rated at 102bhp. These engines were well known for their durability and low-end torque. The motor is said to have been rebuilt, starts easily and sounds great. It is backed by a 3-speed manual transmission with column shift. Everything under the hood looks very original including the factory 6-volt electrical system. Four-wheel hydraulic drum brakes provide stopping power. This Hudson Commodore sedan needs only some care and attention to once again become a classic ride. ALL VEHICLES SOLD “AS IS”.