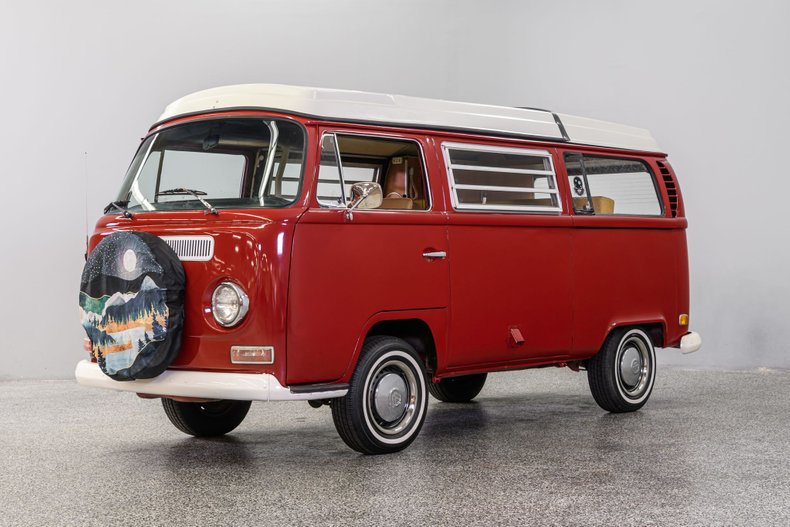 Volkswagen began production of the second generation Type 2 Microbus in late 1967 and it continued through 1979. The packaging was near perfect - a big space inside and a small footprint outside. This second generation was dubbed the 'Bay-Window' Microbus with a one-piece windshield, sliding side door and a total of eight elongated windows for much better visibility. (Gone were the 9/11/19 and even 21 window versions.) There were many configurations of the Type 2, one of which was the Westfalia-built Campmobile. Our 1971 VW Type 2 Campmobile has undergone a partial restoration, but maintains the originality of this iconic vehicle. Its exterior was refinished in single-stage Red with a White top. The tan interior was restored with new vinyl seat upholstery and standard features of the Campmobile include birch plywood cabinetry, ice/cold box, sink, storage compartments, electric hookups, seat cushions and a folding table. A heavy-duty rubber floor mat is in very good condition. Our Campmobile is also optioned with the 'pop-up' top w/side canvas/screens. Power is said to be furnished by a 1700cc air-cooled VW 4-cylinder that the owner states has never required a rebuild. Factory rated at 67bhp, the engine appears to have received a recent major service including a new carburetor and ignition components. This boxer motor is backed by a 4-speed manual transaxle. The chassis is fitted with 4-wheel drum brakes and steel wheels with center caps and radial tires. A spare tire carrier has been mounted on the front and a trailer hitch-ball arrears. If you are looking for something a little smaller than a Winnebago, and a lot more unique, this may be your ticket. A VW Campmobile is timeless. ALL VEHICLES SOLD “AS IS”.