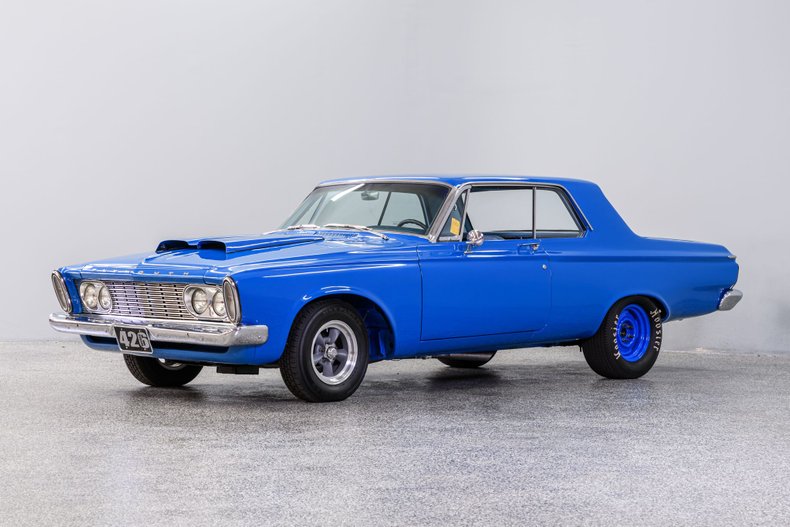 Plymouth officially entered the 'muscle car' race in '68 with the Roadrunner but folks had been racing S/S MOPARs for years. The 'B' body Plymouths and Dodges lacked nothing – horsepower, torque, indestructible transmissions and a solid chassis for traction. The Beach Boys released a song in the '60s that included a lyric that went something like this: 'But parked out back in a rickety garage, there's a brand new, shiny Super Stock car'…. and Autobarn just found it. This street-legal '63 Plymouth Belvedere S/S tribute, originally from Southern California, would have ruled Colorado Boulevard. Beginning with a rust-free 2-door post (70k miles), this Plymouth Belvedere was the beneficiary of a complete rotisserie restoration in 2002 and it is stunning. Exterior panels are laser straight and finished in virtually flawless 2-stage Petty Blue (including the undercarriage). All of the exterior chrome is new and the ram-air hood is functional. The interior carries over the S/S theme with custom front buckets, rear seat delete and new headliner/door panels. Interior fit and finish is impressive. According to the owner, the engine was professionally built and output is said to be 650+ race-ready horsepower. This is a beast. The 440ci 'tall' block was donated by a '69 MOPAR and has received the following performance upgrades:
• Bored .030 over to 452ci
• 413 Forged crank and rotating assembly w/10.0:1 pistons
• Edelbrock aluminum heads
• MOPAR Stage III S/S camshaft
• Mancinni Cross Ram intake w/dual 650cfm Holley performance carbs
• Electric fuel pump
• Crane ignition
• 4-core HD radiator with electric fans.
• Tube headers to a 3” custom exhaust w/electric cutouts
The homegrown 'Max-Wedge' is backed by a built 727 automatic w/TCI converter (3,000 stall). Torque is delivered to a Chrysler 8-3/4” positraction differential w/4.10:1 gearing. The chassis is fitted with sub-frame connectors, new front suspension, 90/10 front shocks and new HD rear shocks/springs. Brakes are manual disc/drum. American Torque Thrust 14” wheels are fitted out front and steel rims with 275/60x15” Hoosier Quick Times are mounted arrears. Study again the photos of this bona fide MOPAR S/S tribute. It is correct and impressive – you will not be disappointed, and hang on. ALL VEHICLES SOLD “AS