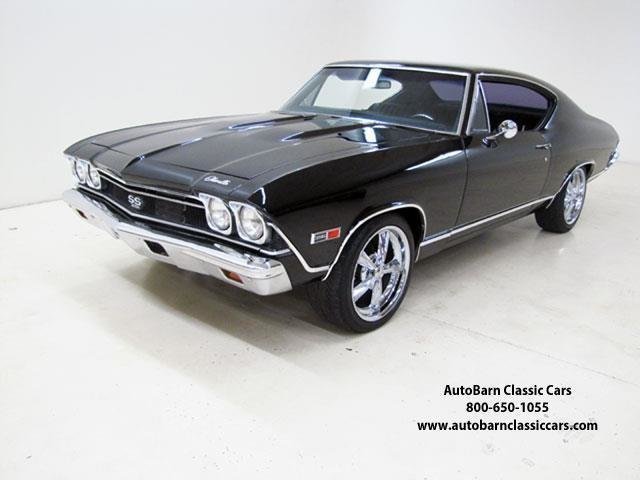 STK 2079 1968 Chevrolet Chevelle SS In 1964, Chevrolet began production of an automobile that would become a muscle car legend. The original Chevelle was constructed on a wheelbase not much larger than 'compact' cars of that era. However, the Chevy grew quickly in dimensions and horsepower. The first 'Rat' motors were installed in 1965 and the SS396 was born. In 1968 GM decided to make major changes to their mid-size offerings. This 2nd generation Chevelle has arguably become the most popular muscle cars ever built. Rarely in automotive history has any muscle car garnered so much popularity. According to the VIN number, this Tuxedo Black 1968 Chevelle is a factory SS396. That said, it has received a lot of mechanical upgrades since rolling off the assembly line in Kansas City. The original 396 was replaced (2012) with a built 454 that sounds and runs strong. The transmission is a heavy-duty 3-speed TurboHydraumatic with a manual valve body spinning a 12-bolt 3.73:1 positraction rear end. Power-assisted front discs and rear drums manage stopping. The exterior received a total re-spray in 2015 that is virtually flawless. Five-spoke ION Series 625 (18x8) chrome alloys provide an elegant accent. The black vinyl bucket seat interior was fully restored and looks better than new. This Chevelle SS is going to make some new owner very proud. Call 800-650-1055 or visit www.autobarnclassiccars.com for additional information. ALL VEHICLES SOLD AS IS.