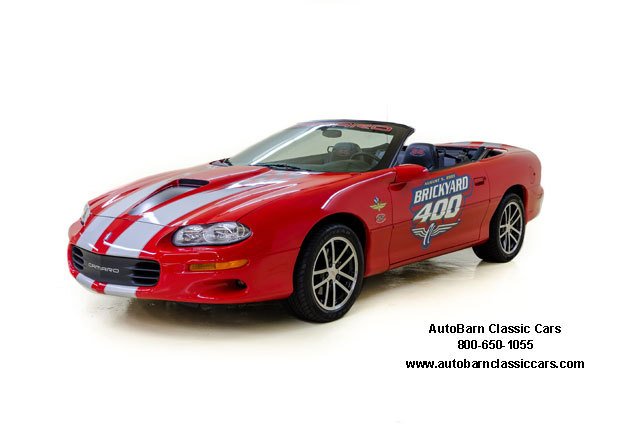 The 2002 model year was to have been the last year of production for the Chevrolet Camaro. To commemorate the 35-year run, Chevy produced 45 'Brickyard 400 35th Anniversary Edition' convertibles and showcased them at NASCAR's Indy race in the fall of 2001. This car is number 8 in that small group of collectible RPO Z4C/WU8 Camaros. The all-original convertible shows 5,841 miles on the odometer and comes with a complete binder of documentation. Each of these cars was finished in Bright Rally Red with wide silver solid/checkered stripes, 35th SS Anniversary Edition badging and special Brickyard 400 decals. All Anniversary Editions were also fitted with a special Ebony/Gray leather interior. Other features include: ABS 4-wheel disc brakes, power steering, A/C, tinted power windows, power driver's seat, gauge package, cruise, tilt-wheel, theft deterrent system, keyless entry and 500 watt Monsoon AM/FM/CD sound system. It is powered by Chevy's 325hp LS-1 5.7L V8 backed by a 4-speed automatic transmission. The factory differential is equipped with traction control and 3.23:1 gears. Every Anniversary version was equipped with the SS Performance Package, Forced Air Induction Hood, Performance Suspension, 17" alloy wheels and a factory commemorative car cover. This beautiful, low-mileage Camaro will only continue to increase in value year-over-year. Check the current market value of the '1969 Camaro Pace Car' RPO Z11. GM built 3,500 'replicas' based on the two actual Indy Pace Cars. These Camaros are now some of the most sought after Gen1 models. Call 800.650.1055, or visit www.autobarnclassiccars.com for additional information. ALL VEHICLES SOLD "AS IS".