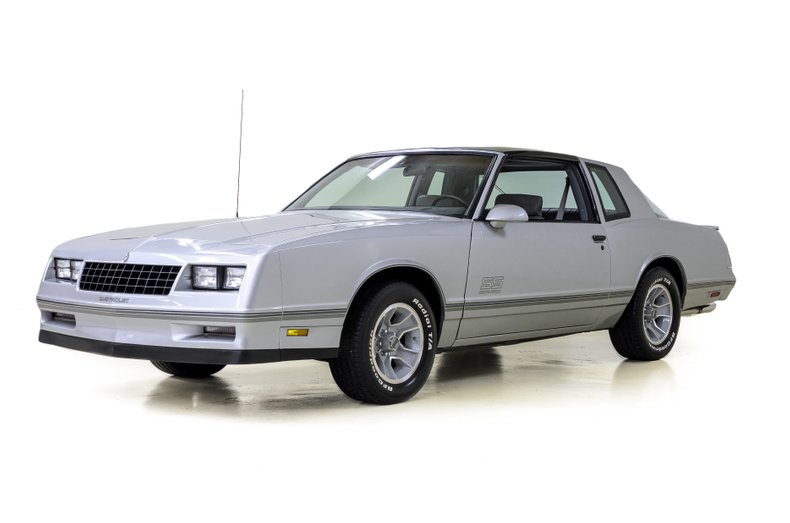 This 1987 Monte Carlo SS Aerocoupe is a beautiful example of top-of-the-line model for this generation - fully optioned and powered by a 305CI HO small block. The car received a partial restoration in 2016. The body was taken down to bare metal and carefully repainted in original Silver. Visual accents such as the subtle front air dam, rear spoiler and BF Goodrich Radial T/A tires on new 15” SS alloy wheels add additional impact to the appearance of the Aerocoupe. Inside, the interior has been partially restored with new leather upholstery and the classic Monte Carlo is equipped with air conditioning, Kenwood stereo, power tinted windows and tilt wheel. The SS option adds a full gauge package, center console and floor mounted shifter. Other features include: smoked glass T-tops. Power steering, power locks/trunk, cruise and dual sport mirrors. A new heater core was also installed. The SS 305HO 4V produces 180 HP and 225lb/ft of torque. It has never required a rebuild, but has recently received a major service including a tune-up, new carburetor and new dual exhaust. It is backed by the GM 200R4 4-speed automatic transmission (also fully serviced) and a posi-traction differential with 3.73:1 gearing. Suspension work has been completed including a front-end rebuild and new shocks all-around. New power-assisted front discs and rear drums provide plenty of stopping power. The current owner has carefully restored this SS to near original condition. That effort is going to make some new owner very proud. ALL VEHICLES SOLD “AS IS”.