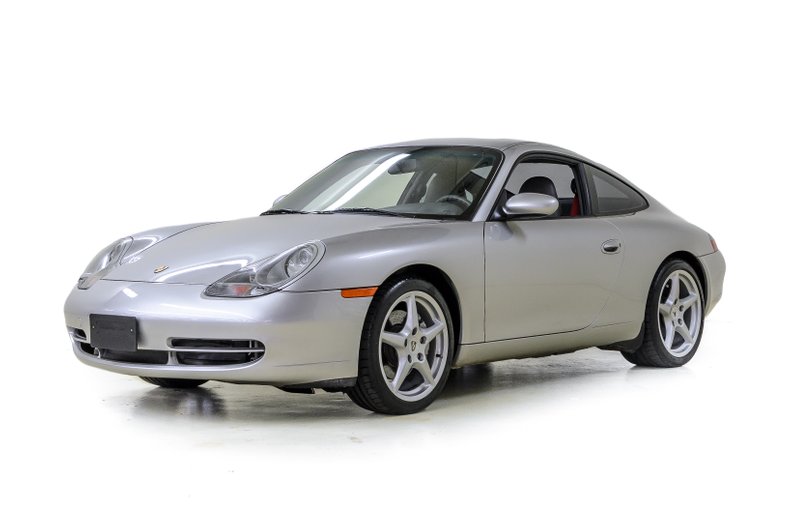 The flagship of performance for the German automaker Porsche has always been the 911. This 2-owner Carrera 4 was designated internally as the '996' model, first released in 1996 and produced through 2004. Styling of the Carrera 4 is directly related earlier 911 models, but beefier. The trunk is still in the front, the engine in the rear, but driver and passengers now reside in a luxuriant interior. This Arctic Silver Metallic Carrera 4 shows less than 52,400 miles on the odometer and is totally original. The 3.4L naturally aspired, water-cooled, aluminum flat six-cylinder engine produces 300bhp/258 lb/ft torque. It utilizes Sequential MPI in conjunction with 24-valves and Porsche's Variocam timing. The powerplant is backed by a six-speed manual transaxle w/oil cooler and AWD differentials. Steering is power-assisted, Bosch ABS power brakes utilize 299mm ventilated discs and factory 17” aluminum alloys mount nice radials. The Porsche Carrera 4 handles with brilliance, but there is really no sane way to approach the 911's grip limits on the street. Our Porsche's interior is as nice as any luxury car every produced and the factory grey leather is still in very good original condition. Standard features include: power seats, power tinted windows, power locks, tilt wheel, sunroof and keyless entry. The factory sound system provides a premium AM/FM/6-disc CD changer. Virtually every safety feature is standard on the Carrera 4 including dual front, side and head-curtain airbags. This Porsche 911 is a safe performance coupe that will move very quickly. ALL VEHICLES SOLD “AS IS”.