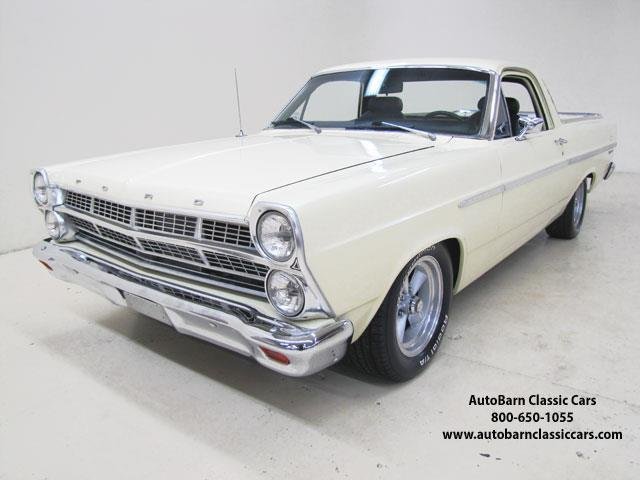 STK 2068 1967 Ford Ranchero Back in the fifties, the Blue Oval folks decided to create a 'hybrid' pick-up. They took a 1957 Fairlane 500 sedan, beefed up the suspension, created a cab and added a bed. The Ford Ranchero was born. Jump ahead ten years and you have this very nice 1967 Ranchero. This version was again designed around the Fairlane sedan, a mid-size offering in '67 - smaller, leaner and much quicker, but the same concept. Our fully restored Ranchero has experienced significant upgrades to that 60's factory configuration. Under the hood, a strong running 351ci Cleveland was completely rebuilt before installation in 2014. The great thing about Ford small-block swaps - physically, the engines are all the same basic size. An engine upgrade looks like a factory installation. Behind the Cleveland is a 3-speed automatic transmission and Ford 9 differential with street gearing. The body was repainted an understated shade of yellow in 2013 and the interior was redone in black vinyl. Bucket seats fit nicely around a custom console. The dash holds a full compliment of gauges. Suspension enhancements provide a nice '60s stance and period correct American Racing wheels finish the look. The Ranchero is equipped with A/C, AM/FM/MP3 stereo, power steering and power disc/drum brakes. This great running Fairlane classic will 'carry-the-load' or just look good in your driveway. Call 800-650-1055 or visit www.autobarnclassiccars.com for additional information. ALL VEHICLES SOLD AS IS.