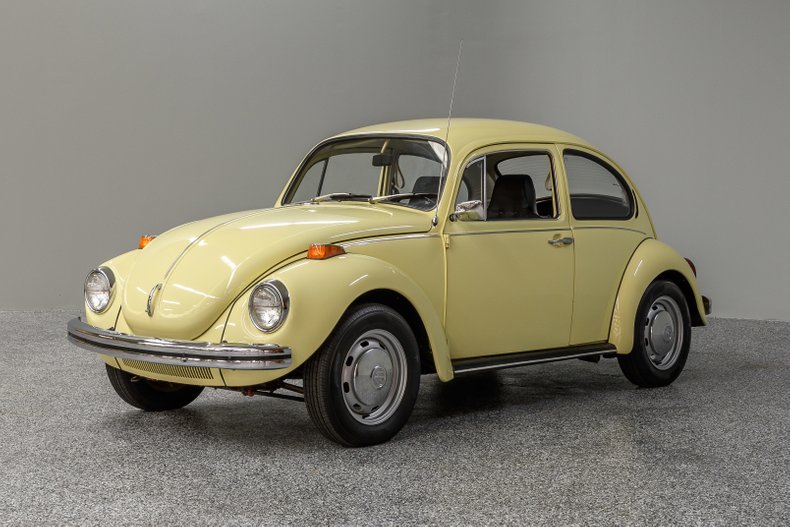 Early in 1972, sales of the Volkswagen Beetle topped 15,000,000, surpassing those of the Ford 'Model T', to earn the bug the title of "world's most popular car." This stunning 1972 Volkswagen Super Beetle is an amazing example of one of these classics. Our Beetle is all-original except for an exterior re-spray (believed to be 1965 Mustang Yellow) in 2003. The factory interior is in very good condition. Dash and gauges are excellent and the sound system has been upgraded with an aftermarket AM/FM/cassette. True, there is no air conditioning, no power seats or power locks, but there is a flow-through ventilation system, tinted windows and two luggage spaces - one under the front hood plus a second in the carpeted area behind the folding rear seat. Standard safety features include a four-spoke energy-absorbing steering wheel, seat belts for the driver and passenger and two-speed electric wipers with a pneumatic washer system. The Beetle is powered by a 60HP 1600cc flat four that is totally original, never rebuilt. In 1968 Volkswagen introduced a 3-speed semi-automatic transmission. Our VW is equipped with this “Automatic Stick Shift” gearbox which utilizes a torque converter and vacuum-operated clutch. Models equipped with this transmission also received an improved semi-trailing arm rear suspension. The 4-wheel drum brakes are managed by a dual master cylinder and perform well. Volkswagen 15” road wheels with factory hubcaps mount nice 165x80x15” radial tires. This is a nice “Bug” and someone is going to have a lot of fun with it. ALL VEHICLES SOLD “AS IS”.