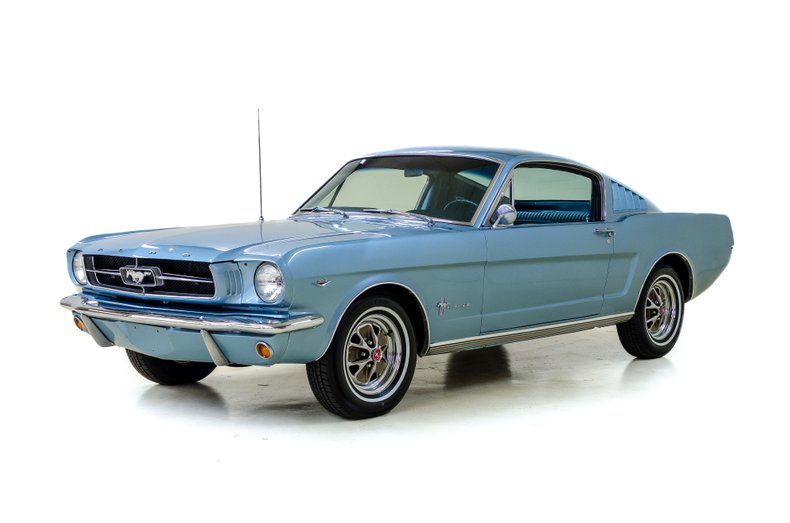 The Ford Motor Company changed the automotive landscape at the New York World's Fair in 1964. Arguably, no car in history affected the way Americans perceive automobiles like the Mustang did. Fifty years later, Ford is still making Mustangs, still in the image of their original concept. Ford introduced the Mustang 2+2 fastback for the '65 model year. It was an instant success that became the basis for Carroll Shelby's GT350. This 1965 Mustang 2+2 is a partially restored example of that popular American icon. The body was refinished in Ford 'Silver Blue' and the interior has been reupholstered in blue/white vinyl. Door cards, carpeting, dashboard and steering wheel are all in good condition. Sounds are produced by a factory push-button AM radio. Based on the VIN number, this Mustang left Ford's Dearborn factory with a 200ci six-cylinder powerplant. It now houses what we are told is a 289ci V8. The small block Ford utilizes a 2-barrel carb with dual exhaust and an alternator-based AC electrical system (new for 1965). A Blue Oval dress-up kit provides a nice look under the hood. Matched with the 3-speed Cruise-o-Matic automatic gearbox and factory differential, this is a very dependable street set-up. Period correct Mustang styled-wheels mount new radial tires and brakes are 4-wheel manual drum. This is a nice Mustang 2+2 driver that will quickly find a new home. ALL VEHICLES SOLD “AS IS”.