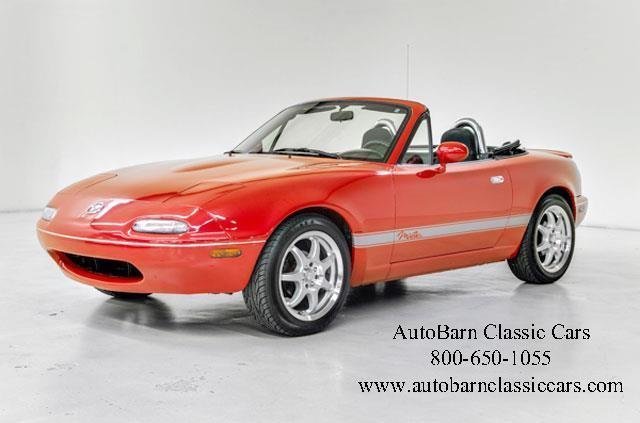 STK 2112 1992 Mazda Miata MX5 The Miata was clearly created by and for enthusiasts. The shape was nostalgic, but not imitative. Mazda captured the essence and flavor of the sports cars of yore without copying any one design. Of course, if all you see here is a '90s version of the Lotus Elan, what's so bad about that? This 1992 MX-5 is a very nice example of the Gen 1 Miata. The partially restored roadster received a new coat of Red Metallic paint in 2014. Classic side stripes, a subtle rear spoiler and new period correct 7-spoke alloy wheels provide sharp accents. The interior was restored back to original with gray/black cloth. Carpeting and dash are in virtually new condition and the previous owner added custom chrome roll bars. Your sounds will come from by a nice aftermarket in-dash stereo/CD set-up. The A/C is fully functioning and the vinyl top (with glass rear window) is in very good condition. Horsepower is supplied by a normally aspirated version of the Mazda 1.6L DOHC power-plant and the factory five-speed manual transmission was derived from the Mazda 929 with revised gear ratios. This engine has recently received a major service including a new timing belt. New power assisted 4-wheel disc brakes provide the stopping capabilities and the suspension has been upgraded with a highly acclaimed alloy front-strut support bar. This Miata really delivers an honest-sports-car feel. Call 800-650-1055 or visit www.autobarnclassiccars.com for additional information. ALL VEHICLES SOLD AS IS.