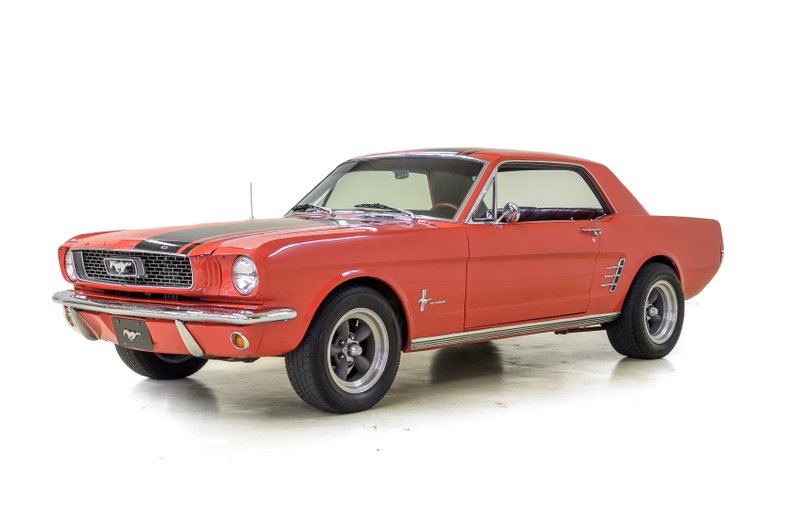 Ford has been producing the Mustang for over 50 years. After many generations, in many ways, the current model remains very similar to the original concept. This 1966 Mustang coupe is a fully restored example of this popular American icon, with some nice upgrades. The body was refinished in Bright Red (2005) and period correct American Racing Torque Thrust wheels with Cooper radials make for a sharp exterior. The interior was reupholstered in burgundy vinyl - door cards, carpeting, dash and tinted glass are in very good condition. Our coupe is equipped with VintageAir A/C, Supro gauges, tilt wheel and aftermarket AM/FM stereo. The 302 small-block Ford was stroked to 347ci and fitted with 10.5 pistons, Edelbrock intake/carb and JB shorty headers. Exhaust is 2.5” Flowmaster and the owner claims that the motor puts out 430bhp. The transmission is a rebuilt C4 with a shift kit and 2500-stall convertor. A Ford 8” rear holds 3.55:1 gears. Cooling is provided by an HD radiator, serpentine belt system, electric fans and a transmission cooler. The electrical system has been converted to an alternator based system and power brakes are front disc and rear drum. This is a very nice '66 Mustang coupe that will quickly find a new home. ALL VEHICLES SOLD “AS IS”.