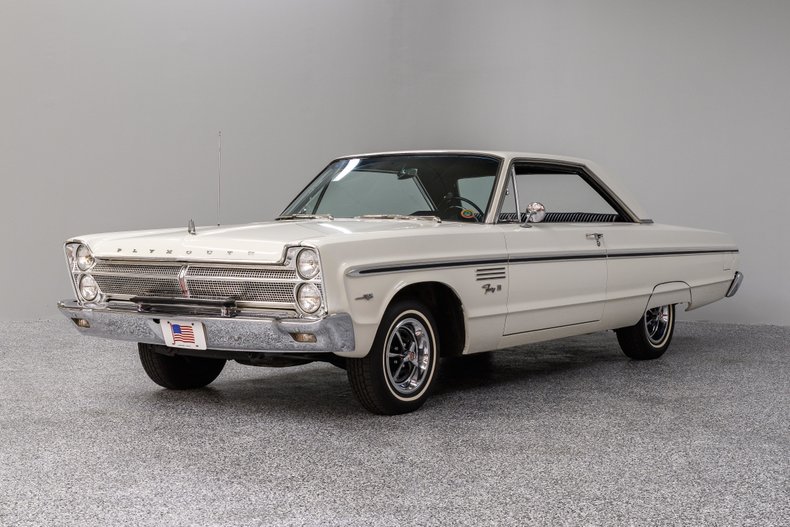 Plymouth 'officially' jumped into the muscle car race in 1968 with the Roadrunner. It was an instant success, mainly because MOPAR had been building performance cars for years, just not marketed them as muscle cars. This 1965 Plymouth Fury is a perfect example of an early MOPAR performance machine. Our partially restored 1965 Fury III is a rare classic – equipped with the 383/4-speed drivetrain configuration. The beautiful Plymouth has only had 3 owners in 53 years and the current owner believes the 32K mileage figure to be actual. It received a professional repaint in 2009 and all exterior chrome/stainless is in very good condition. The original vinyl interior is also in very good condition. There is a full set of gauges, Bosch tach, an impressive factory Hurst shifter and aftermarket A/C to keep you cool. According to the owner, the 383ci wedge has never been rebuilt and retains all factory components with the exception of the Edelbrock 4-barrel that replaced the original Carter carburetor. The A-833 4-speed (designed for S/S racing) is virtually indestructible and like many MOPARs of the era the Fury is equipped with power steering and manual 4-wheel drum brakes. It strikes a nice stance on polished MOPAR Magnum 500 steel wheels that mount Uniroyal radial tires. This is a rare 'bird – a luxury pre-Roadrunner if you will. Study the photos of this bona fide classic. The Fury III is correct and impressive. ALL VEHICLES SOLD “AS IS”.