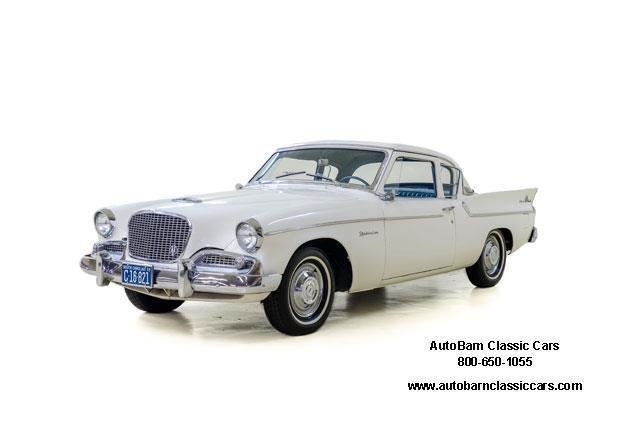 STK 2159 1959 Studebaker Silver Hawk The Studebaker Silver Hawk was produced between 1957 and 1959. It was plainer in appearance than the Golden Hawk, the senior of the two Hawk models. There was less chrome, no supercharger and a simpler paint scheme. The Silver Hawk was based on the earlier Starlight, a similar pillared-coupe model. By 1958, in the midst of a financial crisis at Studebaker, the Golden Hawk was dropped and the Silver Hawk became the only Hawk model in production. Studebaker sold 7,788 Silver Hawks in 1959. This partially restored Silver Hawk is basically a survivor. It has had a recent repaint (2012), but the blue vinyl interior appears to be original right down to the turned metal dash. The factory AM radio is there, but needs a little love. New seat belts have been added for safety. In 1959, buyers could choose the 170ci six or the 259ci V8. This Silver Hawk has the V8 with a 4-barrel carburetor that produces 195HP. The current owner does not believe that the engine has ever been rebuilt. A 3-speed automatic transmission transfers power to 3.31:1 rear gears. Brakes are drum (11f - 10r) with a hydraulic system that has been converted to a dual master cylinder. The current owner is including additional parts and new rubber weather stripping. This is a solid, very original Studebaker. Call 800-650-1055 or visit www.autobarnclassiccars.com for additional information. ALL VEHICLES SOLD AS IS.