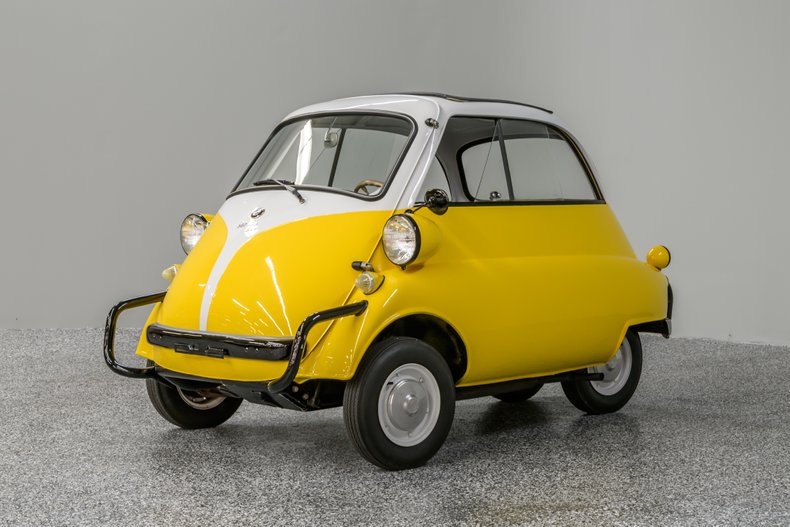 The Isetta is an Italian-designed 'microcar' that was built in numerous countries over time. Because of its original egg shape with bubble-like windows, it became known as the 'Bubble Car'. BMW-Germany began redesigning the Isetta for the 1955 model. By 1957, the Isetta 300 Moto Coupe Deluxe was introduced with longer, sliding side windows to replace the original bubble window design. Although the major elements of the Italian design remained intact, BMW re-engineered much of the car's mechanicals. Power was upgraded to a 298cc single cylinder 4-stroke BMW motorcycle engine that produced 13bhp. It provided torque through a 4-speed manual transmission and a rear wheel chain drive differential. Our 1957 Isetta 300 Moto Coupe was totally restored in 2016. The rust-free body, originally finished in Light Green/White, was carefully prepped and nicely re-sprayed Yellow/White. All of the rubber seals were replaced as well as BMW logo trim pieces. The fully restored black vinyl interior shows very well. Our owner has provided documentation and photos of the restoration process. The Isetta 300 is a piece of automotive lore. Before BMW ceased production of the Isetta in 1962, a total of 161,728 units had been produced. Few examples as nice as this Moto Coupe exist today. It is ready for a new owner who will appreciate this classic automobile. ALL VEHICLES SOLD “AS IS”.