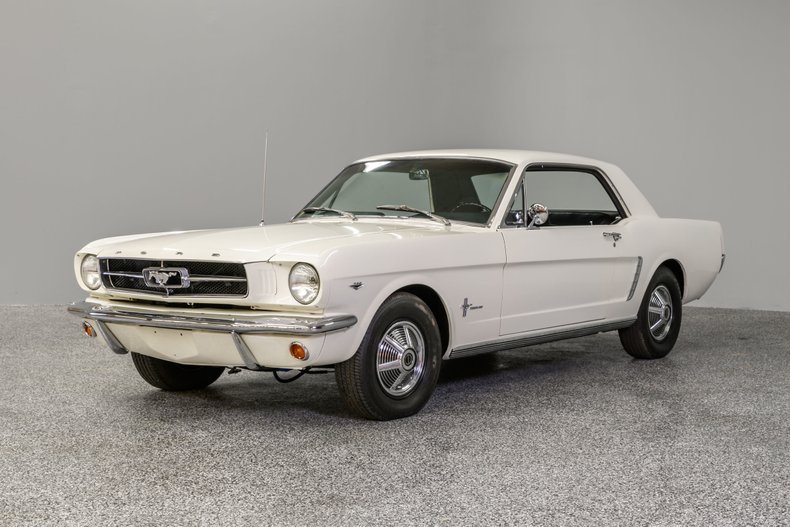 Ford has been producing the Mustang for over 50 years and after many generations its appearance remains remarkably similar to the original concept introduced in 1964. This beautiful 1964-1/2 Mustang coupe is a fully restored example of this popular American icon. The owner has been the caretaker of this classic 'Hoss' for over 34 years and states that the mileage of 50k is believed to be original. The restoration was conducted in 2015. A straight body was refinished in original Wimbledon White and Mustang full wheel covers give the exterior a great factory look. The interior was reupholstered in original black vinyl. Door cards, carpeting, dash and steering wheel are all in very good condition. The coupe is equipped with tinted windows, front seat belts and an aftermarket Sanyo AM/FM sound system. Based on the VIN number, this 'D'-code Mustang left the factory with a 289/4V 210hp powerplant and the owner believes that the drivetrain is entirely original. The 289 has been totally rebuilt to stock specs with the exception of a replacement Holley 600cfm carburetor and is backed by a C4 3-speed 'Cruise-O-Matic' automatic transmission. The chassis has power steering and manual 4-wheel drum brakes. This was a very good performance package in the day. This classic, low-mileage early Mustang coupe will quickly find a new home – be that your garage? ALL VEHICLES SOLD “AS IS”.