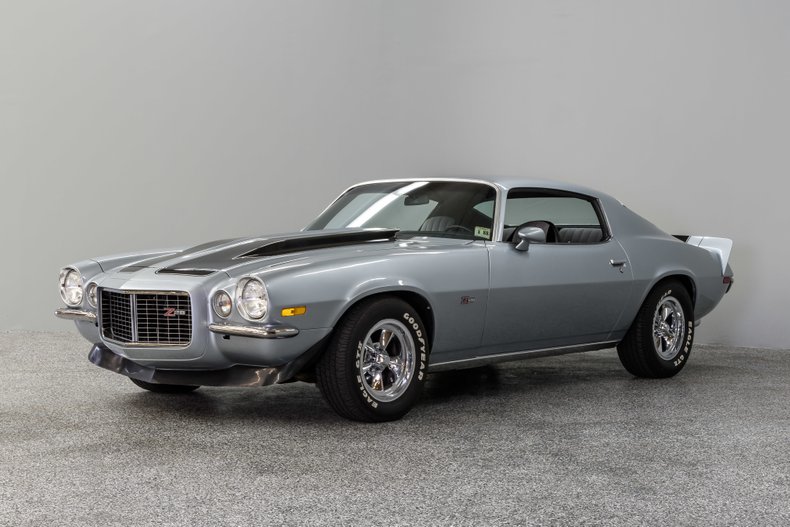 The second-generation Camaro was produced from 1970 to 1981. It was longer, lower and wider than the first-generation and utilized a redesigned A-arm/coil spring front suspension along with rear leaf springs to improve both handling and ride comfort. This carefully restored 1971 Camaro (2011) is a nice Z-28 tribute car. A new coat of Nevada Silver was applied in 2011. The paint is nice, but there are some imperfections due primarily to what appears to be some dust on the body at the time the clear coat was sprayed. Visual accents include: Z-28 stripes/badging, a raised hood, front air-dam and rear deck spoiler. The current owner believes this Camaro was a factory RS/SS model. That could only be determined with certainty if we had the original build sheet. It has many of the features from the Rally Sport option package (RPO- Z22) including the round parking lights, vertical grille bar and split front bumpers. A custom black and grey cloth/vinyl interior looks right at home in this car and is optioned with power locks, remote-control driver sport mirror and a Pioneer AM/FM/cassette stereo. The Camaro is equipped for A/C, but it is not operational at this time. Horsepower is provided by a built 400ci small block fitted with 350ci crank that results in 377ci of big bore/short stroke power, a great alternative for the street. An Edelbrock Victory Jr. intake mounts the Holley double-pumper and exhaust is routed through tube headers to a free-flowing exhaust - sounds awesome. Torque is delivered from a 3-speed automatic to a 10-bolt differential with 3.73:1 gearing. Other performance features include: power steering, power disc/drum brakes and what appears to be the H/D F-41 suspension package. The undercarriage was restored with powder-coated suspension components and anodized bolts. The coupe has a great stance on 15” Foose wheels with Goodyear Eagle radials. This sharp Camaro is a head turner and a fun driving experience. ALL VEHICLES SOLD “AS IS”.