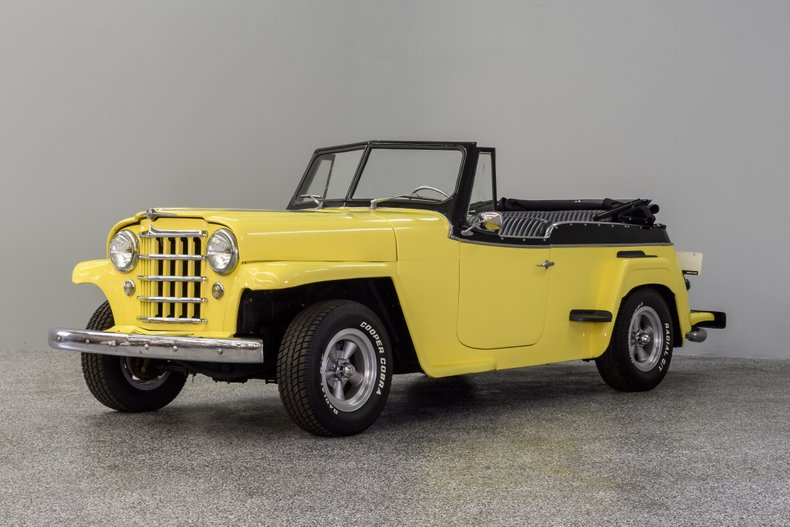 Willys-Overland Motors produced the original Jeepster from 1948 to 1950. It was developed to bridge from Jeep's established functional market to the passenger automobile market, hence one of America's first 'cross-overs'. The basic model included many deluxe features for the time, but was never marketed correctly by Willys. In total, almost 20,000 were manufactured. This 1950 Jeepster, one of only 5,800 built in this final year of production, received a cosmetic restoration in 2015 and is a 'work-in-progress' example of the rare classic Jeep. The Jeepster's body is solid and the undercarriage appears to be in fairly good condition. That said, there are some minor rust issues on some of the undercarriage components that should be addressed. A Bright Yellow finish was chosen for the re-spray and black stripes are complimented with carbon fiber accents. All chrome is in very good condition and the 'continental kit' adds a definitive accent. A black convertible top is in excellent shape and 5-spoke American alloys w/Cooper radials provide a final touch to the exterior. Interior seats and door cards were nicely reupholstered in pleated black vinyl and the restored dash holds a complete set of factory gauges in the 'Mini-style' center instrument pod. Some of the floorboards appear to have been replaced and all are solid. The F4-134 Hurricane engine, a cast iron overhead valve 4-cylinder, was rebuilt in 2010. These motors were an improved version of the Jeep 'Go-Devil' flathead and were virtually indestructible. It is fired by a 6-volt system and puts out 72bhp. The T-96 3-speed manual transmission is equipped with standard overdrive and '3-on-the-tree' shifter. Torque is delivered to a rear differential w/4.88:1 gears. This is a rare, partially restored Willys-Overland Jeepster that is fun to drive. It may still need some minor repairs, but it won't be here long. ALL VEHICLES SOLD “AS IS”.