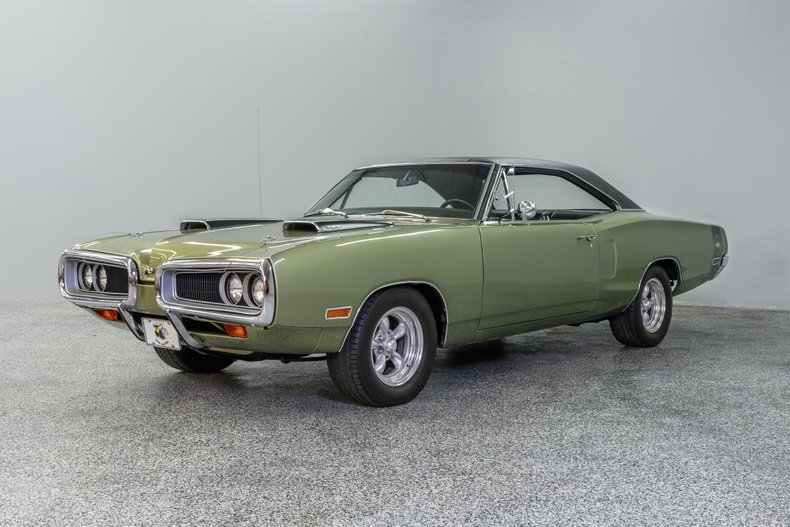 The 'Super Bee' was Dodge's budget-muscle competitor to the Plymouth 'Road Runner' and all the rest. It was based on the 2-door Coronet model and featured many of the same performance upgrades as its Plymouth sibling. 'Scat Pack' was its symbol. This restored 1970 Dodge Super Bee retains its original appearance and performs much like it did in 1970. The two-stage re-spray of Light Green Metallic is in very good condition with factory-correct Bumblebee racing stripes and 'Scat Pack' emblem. Other accents include a matte black 'Fresh Air' hood (w/Richard Petty signature) and black gator-grain vinyl top. The restored interior features green vinyl seating, factory AM radio, a full compliment of gauges and factory AM stereo system. The rebuilt 383ci wedge was the base engine for the Dodge Super Bee and featured cylinder heads, camshaft and induction system borrowed from the famed Chrysler 440ci Magnum. It is married to Chrysler's best, the 3-speed 727 TorqueFlite automatic. The undercarriage is solid and nicely detailed with a new fuel tank and shocks. Handling is aided by power steering, 4-wheel drum brakes w/dual master and American Racing wheels with BFG Radial T/A tires. This rare Super Bee is a piece of MOPAR history from a time when muscle cars ruled the streets. ALL VEHICLES SOLD “AS IS”.