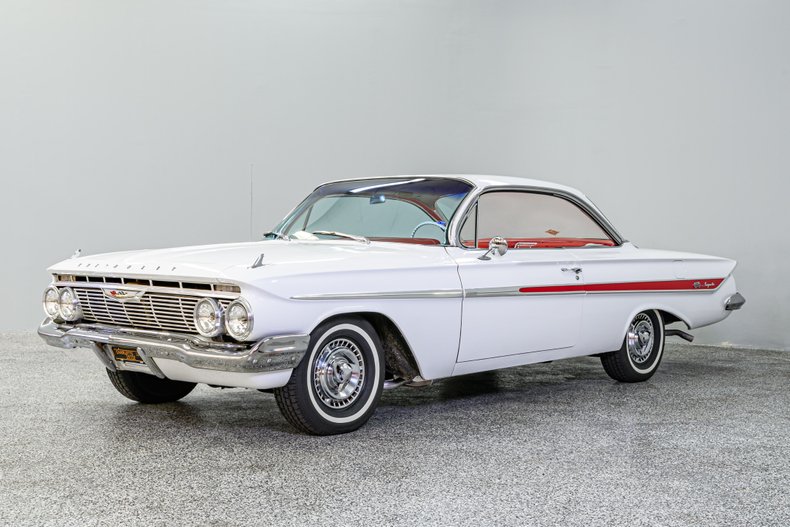 Detroit was producing performance cars long before someone coined the phrase 'muscle car'. They were larger and heavier than their mid-size counterparts, but had amazing powertrains. By 1961, the Chevrolet Impala was maturing into one of these classic models. On the exterior, the big fins from previous years had disappeared, but the cluster of three round Impala taillights remained. These changes made the bodylines look much smoother, The Impala and Bel-Air two-door sport coupes each featured new roofline styling, which would become known as the 'Bubbletop'. Our beautiful Impala 'Bubbletop' had a full restoration in 2003. It is now badged as a Super Sport, but our owner states that it is not an original SS. That said, it has most of the Super Sport features including SS trim inside and out, power brakes, spinner hubcaps, 7,000 RPM tach (inop) and 'Corvette' passenger dash grab bar. The Impala is powered by the earlier version of the famous '409' - the 348ci engine W-code. According to the VIN number, this Impala came factory equipped with a V8. (The owner states that this 348 is not the original engine.) The “Turbo-Thrust” 348 W-Code engines were powerful motors with much more torque than the early Chevy small-blocks. Equipped with the 3x2 Rochester intake, advertised horsepower was 280bhp with 355 lb/ft of torque. The chassis is equipped with a 4-speed manual gearbox, power steering, power 4-wheel drum brakes plus new fuel lines, brake lines and exhaust system. This 2-door hardtop has a beautiful 2-stage re-spray (2003) of original Ermine White and all chrome/stainless are excellent. Inside, the interior is an invitation to ride in style. A fully restored, back-to-original interior features cloth/vinyl seats, new door panels and all complemented by a nicely detailed stock dash and Muncie shifter w/shift console. There is an additional SunPro gauge package and the window glass is tinted. If you appreciate 'old-school' BowTie performance, and sound, you should consider this Impala 'Bubbletop'. ALL VEHICLES SOLD “AS IS”