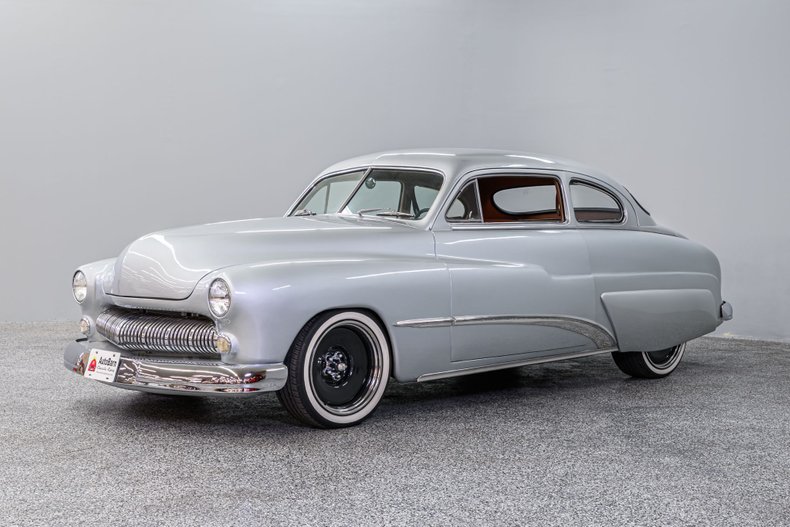 The Mercury Eight was the first and only model produced by Mercury from 1939 through 1951. The first post-war model was introduced in 1949 with distinctive 'ponton' styling. Its restyled, fully enclosed body ended the monotony of warmed-over pre-war styles and sales figures for both Ford and Mercury broke records in 1949. During this era, and beyond, the stylish 'Lead Sled' Merc Eight has always been popular with customizers. This 1949 Mercury Eight resto-rod coupe has been fully restored with many custom and mechanical upgrades. (There is a large folder provided with the car that fully documents the recent restoration project.) The owner asserts that our Merc rides on a 1974 Chevelle chassis. Its exterior received a professional 2-stage finish accented with period-correct fender skirts, 'Steelie' wheels w/trim rings and whitewall radials, 18x8's in the front and 20x91/2's in the rear. Doors and trunk are operated with poppers and all chrome is in excellent condition. The stunning interior - including the headliner - has been beautifully recreated using high-grade Cinnamon vinyl. A factory dash is now fitted with a complete set of AutoMeter Vintage gauges and a Sony AM/FM/CD stereo system for your listening pleasure. Climate control is managed by a Hurricane CAP-1100 A/C system from Old Air Products and the handsome Mark 40 2-spoke wheel is mounted on a tilt-steering column. Our Mercury is powered by a rebuilt Chevy 348ci 'W' block. The vintage 348/409 motors have a wonderful old-school sound – perfect for this car. The intake system was upgraded with an Edelbrock manifold and 580cfm Holley dual-feed four-barrel carburetor. It is backed by a GM 700-R4 OD automatic transmission with custom shifter. A Griffin aluminum radiator w/electric fan has also been installed and all electrics have been upgraded to a 12-volt system completely rewired with a new harness. Steering is power assisted and brakes are power disc/drum units. This Mercury Eight 'Lead Sled' Coupe is a retro-custom that has been carefully thought out and meticulously built - it is literally timeless. ALL VEHICLES SOLD “AS IS”