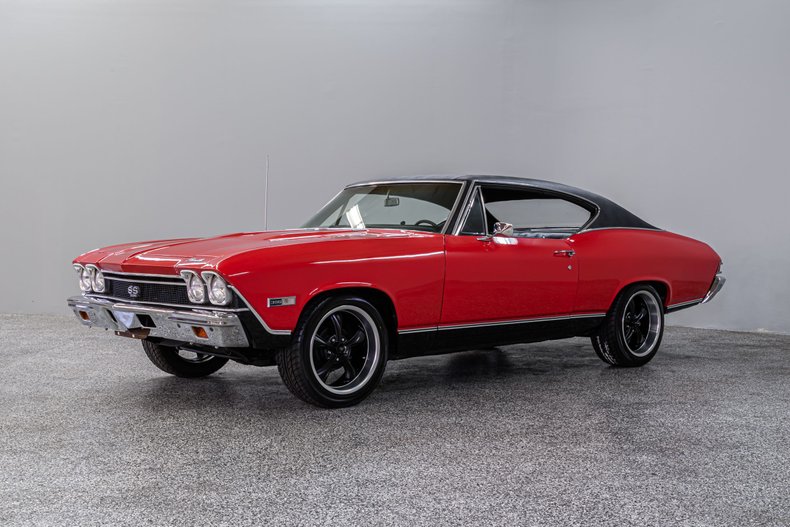 In 1964, Chevrolet began production of an automobile that would become a muscle car legend. The original Chevelle was constructed on a wheelbase not much larger than 'compact' cars of that era. However, the Chevy grew quickly in dimensions and horsepower. The first 'Rat' motors were installed in 1965 and the SS396 was born. In 1968 GM decided to make major changes to their mid-size offerings. This 2nd generation Chevelle has arguably become one of the most popular muscle cars ever built. According to the VIN number, this Matador Red Chevelle is a factory SS396 (VIN code 138…..). The exterior received a total re-spray in 2019 and a new vinyl top was installed. Five-spoke 18” Ridler alloys (8”f/10”r) provide an elegant accent. The black vinyl interior was carefully refreshed with new upholstery, and a 'Z28' style spoke wheel was added. Unusual aspects of this Chevelle include a front bench seat, standard gauges and a column shifter - all standard features on the '68 SS396. Windows are tinted and sounds are provided by a Sony AM/FM/CD stereo system. The owner states that the matching numbers 396ci motor was rebuilt in 2018. It is backed by a GM 3-speed TurboHydramatic transmission that delivers power to a 12-bolt differential with good street gearing. The Chevelle's chassis is fitted with power steering, manual drum brakes and a new exhaust system. This Chevelle SS396 is going to make some new owner very proud. ALL VEHICLES SOLD “AS IS”.