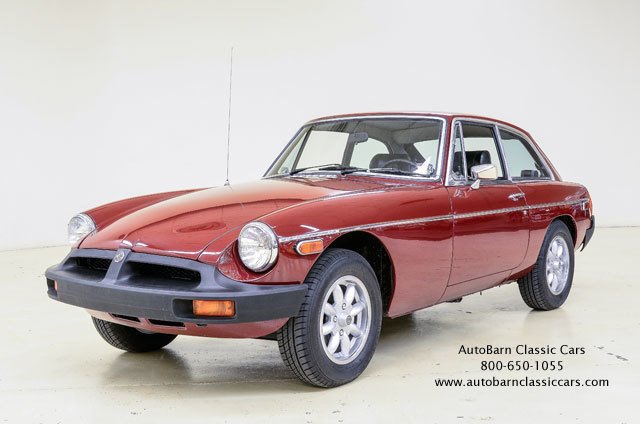 STK 2103 1974-1/2 MGB GT The affordable MGB was a car that was mainly intended to be a two-seater replacement for the hugely successful MGA. The GT version was announced in October 1965 and was an overnight success. In its 15-year production span, the GT proved to be a very popular and adaptable car with over 125,000 built. The Italian design studio of Pininfarina was responsible for the GTs pleasing lines. It was one of the first mass production cars to benefit from the relatively newly developed computer aided design techniques. Due to the GT's superior aerodynamics a top speed of over 100mph was achievable. This 3-owner 1974, fully restored GT is a good example of that design. The Damask Red original color, applied in 2015 (base/clear), is virtually flawless. A set of period-correct Minator 14 spokes couldn't look better. All chrome and stainless components are top-shelf. Body rubber seals have been replaced. The black interior has been fully restored (carpets/ panel kit/seats) and looks as it did 42 years ago - and all of the electrics work. Mechanically, the GT was virtually identical to the roadster. The GT was fitted with the roadster's reliable five bearing engine. This car's engine was completely rebuilt - cylinders bored, new pistons, .010/.010 grind crank/rods, new cam (stock grind) and new lifters and bearings. The cylinder head was totally reworked including hardened seats for use of today's lead-free fuel. Both original SU 'HIF' carbs were rebuilt and a new fuel pump and fuel tank were installed. The 4-speed manual with electric overdrive operates flawlessly. Brakes are disc/drum. A new master cylinder, rear wheel cylinders/shoes and flex lines have been installed. Documentation and photos of the restoration are available. This British icon just makes you smile. It is looking for a new driver. Why not you? Call 800-650-1055 or visit www.autobarnclassiccars.com for additional information. ALL VEHICLES SOLD AS IS.