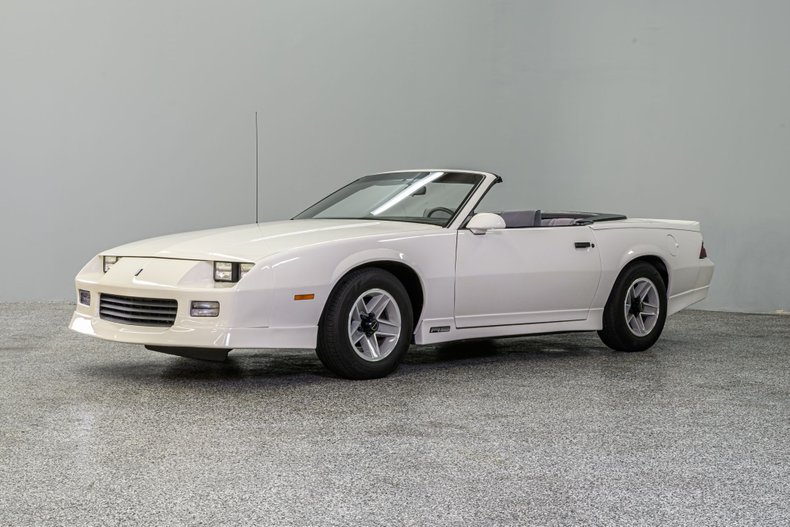 The GEN3 Camaro was introduced in the 1982 model year using the GM F-body platform and production continued through 1992. This fully restored (2016) 1989 Camaro is an 'RS' model that has been returned to showroom condition. It has been the recipient of numerous awards including AACA National Junior & Senior Awards (2015) and the AACA Grand National Award (2016). Documentation of the restoration including all receipts and the original 'tank' build sheet are included in the sale. Our Camaro's exterior was carefully refinished – a professional 2-stage respray of factory White. Accents include RS alloy wheels w/Goodyear Assurance 215/65Rx15 radials, RS logos, front/side ground effect air dams and a rear deck spoiler. The distinctive interior has been restored back to original with stunning upholstery and close attention to detail - nothing was left to chance. Features include A/C, tinted windows, power locks, tilt wheel, full instrumentation and a factory AM/FM/Cassette stereo. The manual convertible top is in new condition. Horsepower is furnished by a 305ci (L03) powerplant that has been totally rebuilt. The owner states that this is the matching numbers engine and output is 170bhp and 255 lb/ft of torque. It is fueled by Throttle-Body Injection (TBI) and backed by a 4-speed THM 700-R4 automatic transmission. The RS suspension incorporates power steering and power disc/drum brakes. If you are looking for a GEN3 Camaro convertible that is in better than factory condition, come drive this RS - it will likely end up in your garage. ALL VEHICLES SOLD “AS IS”