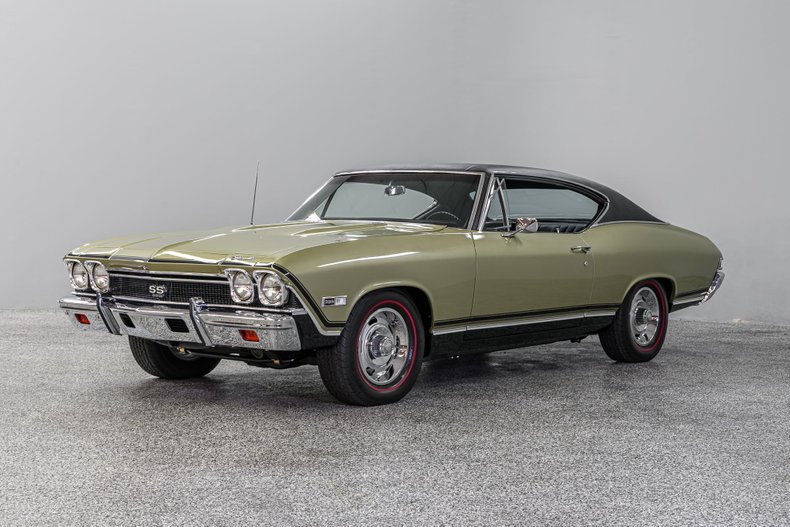 In 1964, Chevrolet began production of an automobile that would become a muscle car legend. The original Chevelle was constructed on a wheelbase not much larger than 'compact' cars of that era. However, the Chevy grew quickly in dimensions and horsepower. The first 'Rat' motors were installed in 1965 and the SS396 was born. In 1968 GM decided to make major changes to their mid-size offerings. This 2nd generation Chevelle has arguably become the most popular muscle cars ever built. Rarely in automotive history has any muscle car garnered such popularity. According to the VIN number, this fully restored 1968 Chevelle is a factory 138code SS396. That said, it has received a lot of mechanical upgrades since rolling off the assembly line. The Chevelle was delivered with a White exterior (code C) and vinyl top, but has been the beneficiary of a professional 2-stage spray of Ash Gold (2012). The black vinyl top is in very good condition. Correct GM rally wheels w/centers-rings mount BFGoodrich red-line radial tires and provide the perfect accent. A black vinyl bucket seat interior was fully restored and looks like 1968. There is a nice center console, factory SS gauge package, AM/FM/cassette sound system and tinted glass. The original 396 was replaced with a GM 454 crate motor that the owner states outputs 500bhp. The owner is still in possession of the original motor and will include it in the sale. The 454 is fitted with aluminum heads, performance cam, aluminum intake, dual-feed Holley and tube headers. The 4-speed manual transmission w/Hurst shifter transfers power to a 12-bolt differential with 3.73:1 gearing. Some features of the clean chassis include power steering, power-assisted 4-wheel Wilwood disc brakes, HD front/rear sway bars and a new fuel tank. This Chevelle SS is going to make its new owner very proud. ALL VEHICLES SOLD “AS IS”.