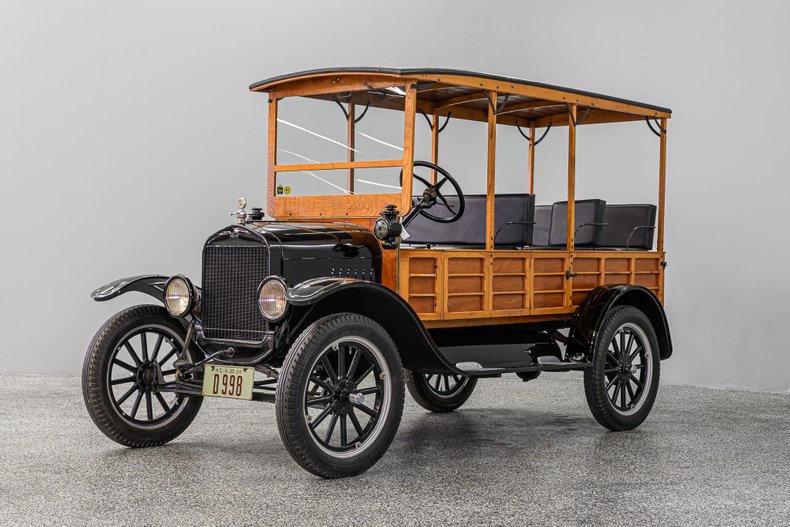 Many folks refer to the post-1919 Model T as a 'Veteran'. This term was coined based on improvements made to this generation over the previous 'Vintage' car. The 'Depot Hack' is one of the rarest models found on this Model T chassis. The Hack was originally intended to be guest transportation for hotels and resorts, but was more often used as a taxi for transporting passengers and luggage to/from railroad depots. The term 'Depot Hack' was derived from the word 'hackney', another word for a taxi. This 1924 Model T Depot Hack runs and drives like it did in '24. Our current owner states that he purchased the Hack from the original owner's family 14 years ago - so it is basically a '2-owner' Model T. According to lore, this Depot Hack provided transportation to and from train stations in the Charlotte/Concord/Kannapolis region. Our handsome Model T received a total restoration (completed in 2001) that included a respray of 'Ford' Black and a careful refinishing of the wooden 3-door body, (virtually all original wood). The passenger compartment features three-row seating, rubber/carpet floor mats, functional gauges, a 4-spoke wheel and a roof structure fitted over wooden battens. This Model T has all of its original drivetrain. Horsepower is provided by the factory 177ci flathead Ford that was rebuilt in 2004 and produces 22hp. The most prominent upgrade to the 'Veteran' was the introduction of an electric starter, which made firing the 4-cylinder engine an easier and safer proposition for the operator. The factory transmission, also rebuilt, is a 2-speed forward Hi/Lo planetary gear unit operated by the three-pedal configuration. Wooden spoke wheels mount period correct Firestone rubber and mechanical rear drums provide braking. Headlights and taillights are electric (6 volt) with two addition kerosene/wick running lanterns at the base of the windshield. This Model T Ford Depot Hack would be a wonderful addition to anyone's Blue Oval collection - take the family for a ride in the country, or to the train depot. ALL VEHICLES SOLD “AS IS”.