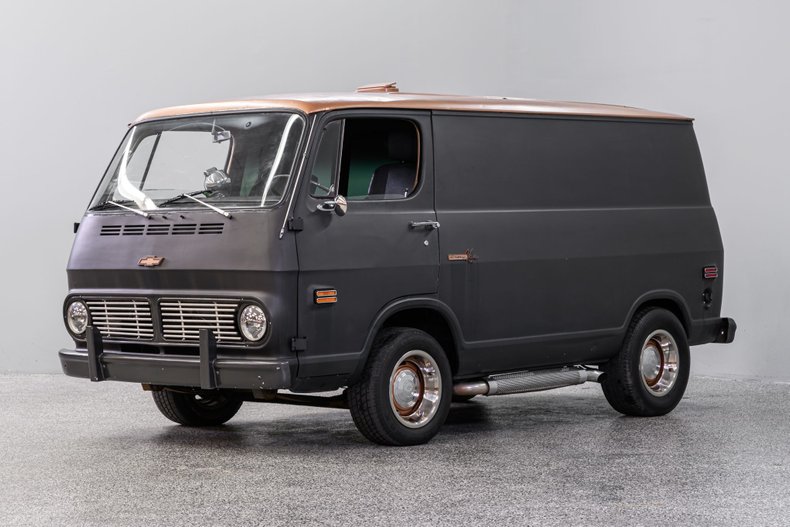 The first generation ChevyVan G10 was produced from model year 1964 through 1966. The ChevyVan had a cab forward design with the engine placed in a “doghouse” between the two front seats. Situating the driver above of the front axle beside the engine is known as a 'cab over' design. The updated second generation G10 was produced from 1967 through 1970. This particular 1969 G10 is a 'survivor' in the true sense of the word – remember the ChevyVan song from the early '70s. The van is built on the 90” wheelbase chassis and is believed to be the 'Sportvan' model due to the fact that it has a multitude of windows (rear and side windows are tinted). This G10 is solid, straight and partially restored, but in need of some final detailing. The exterior is finished in dark gray primer/bronze and a custom grill has been installed. Nice Chevy Rally wheels with caps/rings mount Delta radials. Front seating has been upgraded with modern bucket seats and features include a padded dash, full instrumentation, SunPro SuperTach, '58 Impala wheel and custom shifter. Power windows/locks were not available on the G10, but if you wanted air conditioning there was an optional roof-mounted unit - an option not checked on this vehicle. Based on the VIN (S-code), we believe that this Sportvan was delivered with a 'stovebolt' six-cylinder engine. That motor has been replaced with what is said to be a rebuilt 350ci small-block V8 that is mated to a 3-speed 400 Turbo Hydramatic transmission. Torque is delivered to a posi-traction differential and exhaust exits thru full-length side pipes. The chassis is fitted with air shocks (front/rear), new fuel tank and 4-wheel manual drum brakes. This most unusual ChevyVan is a look back in history that is also a really fun drive. ALL VEHICLES SOLD “AS IS”.