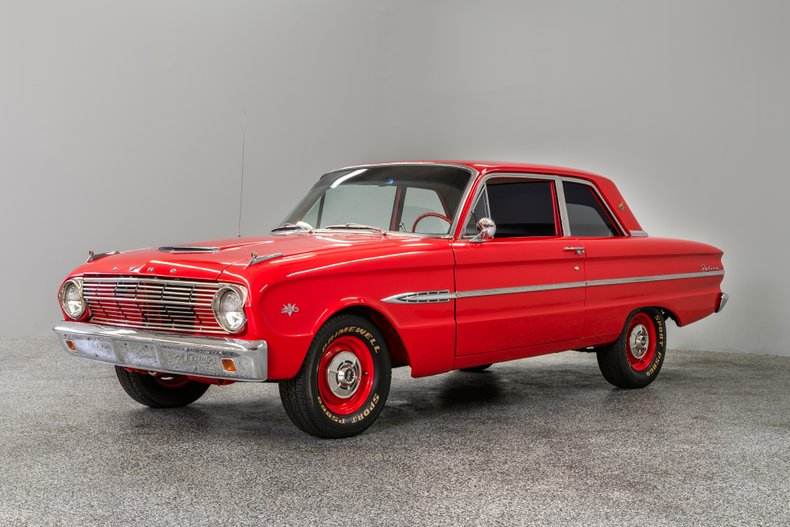 The 1st generation Ford Falcon was introduced in 1960. Development of this scaled down version of the full-size Ford was in response to a changing customer landscape – buyers were willing to trade the benefits of a full-size for a Falcon's lower cost of ownership. (The basic Falcon platform also became the foundation for the 1st Gen Mustang.) By 1963, the Falcon line was expanded to include many different models of this smaller, efficient Ford. This '63 Futura Coupe with its 'Thunderbird' roofline was one of the most popular models. The current owner carefully managed a full restoration over a 10-year period. The exterior was repainted Viper Red in 2016. Both front and rear chrome bumpers look new and factory steel wheels mount nice radial tires. On the inside, seats were reupholstered in black/red vinyl and new carpeting was installed. Dashboard, headliner and all of the tinted glass are in good condition. A full gauge package is positioned below the dash and what appears to be the stock AM radio delivers your sounds. The Futura was delivered from the factory with a 170ci I-6 engine, but the owner states that the current powerplant is the 200ci version of this 'Thrift Power' series. It was totally rebuilt in 2012 and sounds great. The six-cylinder is backed by a Ford-O-Matic 2-speed automatic transmission. A new fuel tank has been installed and a dual-master cylinder now manages 4-wheel drum brakes. This is a solid Falcon Futura Sport Coupe. Enjoy it in its stock form, or build a Futura 'sleeper' to surprise all your friends. ALL VEHICLES SOLD “AS IS”.