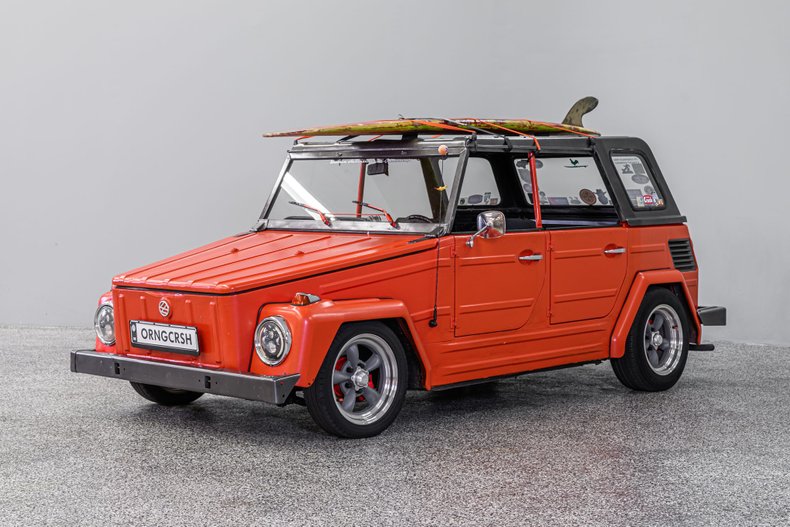 The VW Type 181 was originally developed by Volkswagen for the West German Army. It was based on a concept used by the German Army in WWII and manufactured in Wolfsburg Germany. The Type 181 was a 4-door cabriolet with removable doors/top and lay-down windshield that shared mechanicals with the Type 1 Beetle and the VW Microbus. The chassis was based on the Karmann Ghia floorpan, 3 inches longer than the Beetle and also produced in Wolfsburg. The Type 181 was available to the civilian market from 1968 to 1983, but exports to the US were limited to the 1973-74 model years. Total US sales numbered approximately 25,000 units. Worldwide the Type 181 had a multitude of brand names, but the US version was dubbed the 'Thing'. Our 1974 VW Thing appears to have lived an exciting life. A partial restoration was completed in 2017 and digital photos of the project are included with the car. An exterior respray of Pumpkin Orange was applied as a single stage finish and is in fairly good condition. (The rocker panels do have some minor spot rust, but the chassis appears sturdy.) The interior features Jetta cloth bucket seats, an Alpine AM/FM/CD system, competition-style shifter, SunTach and rare fiberglass hardtop, w/surfboard, fitted to the body. (Our Thing is not equipped with a soft-top.) This Type 181 is powered by a rebuilt 1.6L Volkswagen flat-four air-cooled engine that is fitted with a '40 Series' Weber 2-barrel carb and full exhaust header. It is backed by the Beetle 4-speed manual transaxle that provides better highway gearing than the original unit. Front suspension is a Beetle front beam with 2.5” drop spindles and the rear suspension has been lowered. Brakes are manual front disc/rear drum and Michelin radial tires are mounted on period-correct 15” American Racing alloy wheels. This Thing is your ultimate beach vehicle and holds a unique place in VW lore. ALL VEHICLES SOLD “AS IS”.